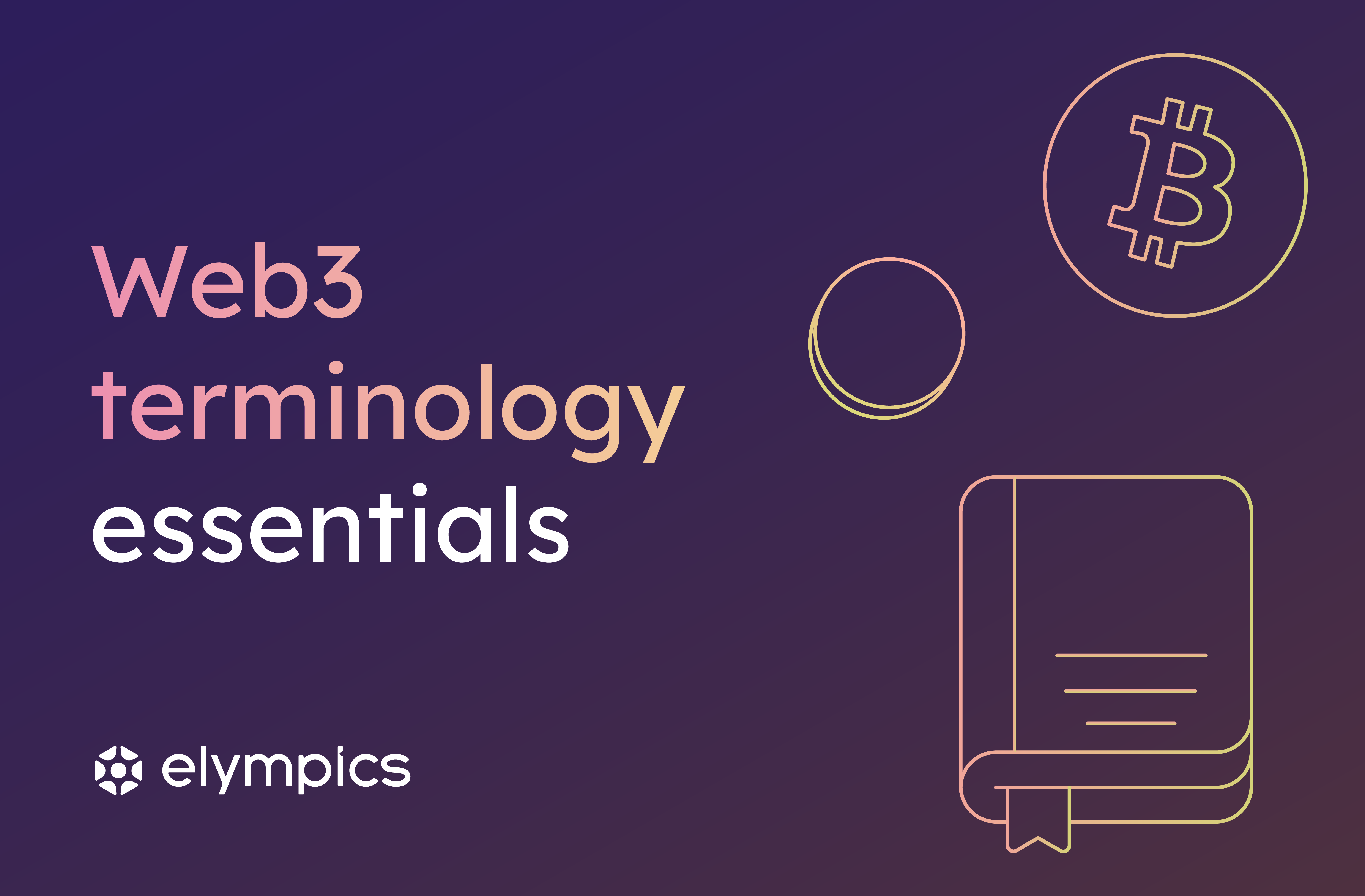 While the web3 industry is still in its early days, it’s developing day by day at an impressive pace. According to Emergen Research, its global market size is expected to reach USD 81.5 Billion in 2030, so it’s definitely a market you might want to tap into.

But what actually is web3, and how does it differ from web2? What do all the blockchain buzzwords from Twitter mean? Here’s a web3 glossary covering the essentials of blockchain, crypto and related topics.

Altcoin – any kind of cryptocurrency other than Bitcoin.

Bitcoin (BTC) – the first implementation of blockchain technology and the first cryptocurrency introduced in 2008 by an unknown person or group of people using the pseudonym Satoshi Nakamoto. Also, the cryptocurrency with the biggest value ever (all-time high of over $68,000 on November 8, 2021) and the symbol of the cryptocurrency sphere.

Blockchain – a type of database that is used to record transactions across a network of computers. It consists of a series of blocks, each containing a record of multiple transactions. Each block is connected to the previous block in the chain using cryptography, creating a chain of blocks that is secured and cannot be altered. The decentralized nature of a blockchain means that it is not controlled by a single entity, and transactions recorded on the blockchain can be verified by anyone on the network. While usually associated primarily with cryptocurrencies and finance, blockchain can be used to store any type of data.

Bridge (AKA blockchain bridge) – a function that connects two blockchains and allows users to freely transfer their cryptocurrencies from one chain to another other (e.g. from Bitcoin to Ethereum).

CEX (centralized exchange) – a cryptocurrency marketplace that allows web3 users to exchange their crypto for other coins or fiat money (usually dollars). It’s centralized (owned by a third party) that monitors and secures transactions. Examples include Binance and Coinbase.

Cryptocurrency (AKA crypto) – a type of digital currency that is not dependent on any kind of central authority like a government or bank. Cryptocurrencies are built on blockchain and based on cryptography which means that they don’t need intermediaries for transactions.

Dapp (also spelled dApp) – decentralized, autonomic application based on blockchain technology (usually built on Ethereum). Basically, any type of application that has been put on a blockchain no matter if it’s used for transactions, gaming, governance, etc.

DeFi (decentralized finance) – a category of dapps serving financial purposes as well as the general label for the financial use of blockchain technology. DeFi apps allow web3 users to perform the financial actions known from web2: taking loans, staking, lending them to others, etc.

Ethereum – one of the most popular blockchains to date with the native cryptocurrency called ether (ETH). As it’s open-sourced, it allows users to build various kinds of decentralized applications on top of it using smart contracts (see below).

Gas fee – a type of transaction fee that all users have to pay in order to perform any transaction on the Ethereum blockchain. Gas fees are paid in ether.

HODL – a term originated from a typo in the word ‘hold’ that stayed in the crypto lexicon to this day. It refers to a strategy used by people investing in crypto consisting of not selling crypto or other digital assets even when prices go down in the belief that they’ll be worth more in the long term.

Mining – a process by which new transactions are added to a blockchain and new units of a cryptocurrency are created. It involves the use of specialized computers, called miners, that work to solve complex mathematical problems in order to validate transactions and create new blocks on the blockchain.

Minting – a process of creating and issuing new units of a cryptocurrency typically done through a process called mining, in which computers on the blockchain network work to solve complex mathematical problems in order to validate transactions and create new blocks on the blockchain. As a reward for their efforts, the computers that successfully create new blocks are rewarded with a certain number of new units of the cryptocurrency.

NFT (Non-Fungible Token) – a unique digital asset recorded on a blockchain. As the name suggests, it cannot be replaced by another NFT, thus its collectable use.

NFT games – online video games based on blockchain technology. In these blockchain games, various in-game objects like weapons or entire characters are NFTs, and players can obtain and trade them. Some of the most popular NFT games include Axie Infinity and The Sandbox.

Peer-to-peer (P2P) – a decentralized network architecture in which participants exchange data between each other without intermediaries.

Public key (AKA wallet address) – a long string of characters that is used to identify a one's wallet or account on a blockchain.

Private key – a long string of characters that is used to sign transactions and provide proof of ownership for a specific wallet or account on a blockchain.

Smart contract – a self-executing contract with the terms of the agreement between buyer and seller programmed within the code. The code and the agreements contained therein are stored on the blockchain.

Stablecoin – a cryptocurrency whose value is pegged to another currency, commodity, or financial instrument. The most popular stablecoins are backed by USD (Tether, USDT and TrueUSD, TUSD).

Wallet – a program or service that allows its users to buy, trade, and store cryptocurrencies. It’s also necessary to use all blockchain-based apps as the first step to enter them is to connect one’s wallet to the specific blockchain. Some of the most popular wallets include Metamask and Coinbase.

Web3 – a concept referring to the third generation of the internet to be built upon blockchain technology and peer-to-peer networks to create a more decentralized and open internet where data and content is owned by users themselves.

Web2 and web3 are terms describing diverse iterations (or development stages) of the internet.

Web2, also known as web 2.0, participative web or the social web, is the version of the internet that we use today. Data and content uploaded online are owned by a small group of people and companies like Google, Meta or Amazon. All the popular platforms like Facebook and Twitter, traditional online banking, news platforms, online shops, etc. represent web2, which means that whenever we put something online, it may be modified or deleted by the owner of the platform.

On the other hand, web3, also known as web 3.0 or decentralized web, is the newest iteration of the internet that focuses on decentralization, privacy, and token-based economics. It’s based on blockchain technology which means that the data and content isn’t owned by third parties. Anything web3 users put on the blockchain belongs to them which means they can do anything they want with their digital assets, be they NFTs or fungible tokens.

Just like in the internet of today, web3 developers may build online apps and make profit from them. dApps (decentralized apps) may be used for financial transactions, social media activities, data storage, community governance or even gaming.

Read more about the differences between web2 and web3